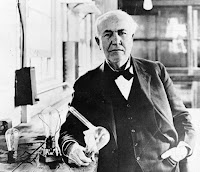 This made me laugh and - like all the best jokes - has an underlying (bitter) truth to it. Thanks to the Times Higher, John Fea and David Swartz for uncovering this gem.
_____________________
Q: How many historians does it take to change a light bulb?

A (by Dr. L): There is a great deal of debate on this issue. Up until the mid-20th century, the accepted answer was ‘one’: and this Whiggish narrative underpinned a number of works that celebrated electrification and the march of progress in light-bulb changing. Beginning in the 1960s, however, social historians increasingly rejected the ‘Great Man’ school and produced revisionist narratives that stressed the contributions of research assistants and custodial staff. This new consensus was challenged, in turn, by women’s historians, who criticized the social interpretation for marginalizing women, and who argued that light bulbs are actually changed by department secretaries. Since the 1980s, however, postmodernist scholars have deconstructed what they characterize as a repressive hegemonic discourse of light-bulb changing, with its implicit binary opposition between ‘light’ and ‘darkness,’ and its phallogocentric privileging of the bulb over the socket, which they see as colonialist, sexist, and racist. Finally, a new generation of neo-conservative historians have concluded that the light never needed changing in the first place, and have praised political leaders like Ronald Reagan and Margaret Thatcher for bringing back the old bulb. Clearly, much additional research remains to be done.

We regret that we cannot accept your historian joke in its present form…. However, a panel of anonymous reviewers (well, anonymous to YOU, anyway) have reviewed it and made dozens of mutually contradictory suggestions for its… improvement. Please consider them carefully, except for the ones made by a man we all consider to be a dangerous crackpot but who is the only one who actually returns comments in a timely fashion.

1. This joke is unnecessarily narrow. Why not consider other sources of light? The sun lights department offices; so too do lights that aren’t bulbs (e.g. fluorescents). These are rarely “changed” and never by historians. Consider moving beyond your internalist approach.

3. Inestimably excellent and scarcely in need of revision. I have only two minor suggestions: instead of a joke, make it a haiku, and instead of light bulbs, make the subject daffodils.

4. This is a promising start, but the joke fails to address important aspects of the topic, like (a) the standard Whig answer of “one,” current through the 1950s; (b) the rejection of this “Great Man” approach by the subsequent generation of social historians; (c) the approach favored by women’s historians; (d) postmodernism’s critique of the light bulb as discursive object which obscured the contributions of subaltern actors, and (e) the neoconservative reaction to the above. When these are included, the joke should work, but it’s unacceptable in its present form.

5. I cannot find any serious fault with this joke. Leeson is fully qualified to make it, and has done so carefully and thoroughly. The joke is funny and of comparable quality to jokes found in peer journals. I score it 3/10 and recommend rejection.
Phil Ward at 10:51 am
Share